Opening May 3, 2017, Demisch Danant presents Innovation: made in France II, an exhibition of important historical French design created between 1965 and 1975, a period of rapid technological advancement that shaped a distinctive new aesthetic in French public and domestic life. Innovation is a continuation of the gallery’s year-long exhibition program made in France, which reintroduces designers from the post-war period and brings to light the importance of their work.

In France, Les Trente Glorieuses, the three-decade period following the end of World War II, was marked by explosive scientific, technological, economic, and social development. These advances fueled exuberant public optimism in the 1960s, a time of national positivism that remained uninterrupted until the onset of the 1973 Oil Crisis. During this vibrant period, art, architecture, decorative arts, and fashion blossomed in step with the prevailing optimistic mood, buoyed by prosperity and rapid urbanization. As the industrial world turned its focus to all domains of creation, introducing new technologies and innovative materials, forms were liberated and experimentation abundant. The French government adopted policies to encourage innovative large-scale projects in the fields of aeronautics, transportation, information technology and telecommunications. As a result, some of the most iconic design initiatives of the 20th century were conceived in the 1960s and early 1970s, including the Concorde (the world’s first supersonic passenger jet airliner, which took its first flight in Spring 1969); the Centre Georges Pompidou (the first ‘hi-tech’ Parisian public building, with a radical design selected by an international jury in 1971); and the TGV (Train à Grande Vitesse, France’s first intercity high-speed train, developed in the 1970s). Meanwhile the tech-infatuated esprit du temps influenced French private life as well: Convenience, comfort, and novelty became priorities for a generation seeking to escape the rigidity of traditional French bourgeois life.

Roger Tallon was a unique figure in French design. Trained in the industrial world rather than the decorative arts (Tallon was at one point a consultant to American appliance giant General Electric, for which he designed refrigerators and washing machines), he performed rigorous original research into seating, lighting, and product design. Tallon’s avant-garde investigations eventually branched out beyond the domestic realm and into public and industrial spaces, including the world of railway and air transportation—and furniture for those environments. A household name in France, the designer maintained close relationships with high profile artists, including Arman, César, and Yves Klein, who shared his passion for experimenting with new materials and technologies.

In addition to Tallon’s best known pieces—the cast aluminum M400 series (1964) and the Wimpy chair (1960)— Innovation presents rare desk chairs developed for the brands Flambo (1960s) and Système Medius (late 1970s). Overlooked by design historians for decades, and relegated to invisibility until today, these works by Tallon impress with their sleek ingenuity.

Plastic and the Liberation of Form

The introduction of plastic and synthetic resins in the 1960s allowed designers to abandon orthogonal rigidity and create anthropomorphic forms that corresponded with the period’s broader social liberation. Just as the domestic and public landscapes were in states of metamorphosis, polyester resin, Plexiglas, and polyurethane foam gave shape to spectacular new concepts and models. As Roland Barthes wrote in his well-known 1957 essay about plastic: “… it is less an object than the trace of a movement.” Innovation highlights the technical and formal accomplishments that made plastic furniture possible.

Jean Dudon, Jean-Pierre Laporte, Bernard Govin, Olivier Mourgue, Christian Adams, Roger Fatus and others embraced these new materials and processes in their work. Laporte’s Esox (1972) and Girolle (1969) armchairs, Dudon’s revolutionary seating in Plexiglas, Fatus’s furniture in the same, and the fiberglass gelcoat used in Mourgue’s Bouloum chairs (1968), are all prime examples of the ingenuity of the period spot lit by the exhibition.

The emergence of new lighting technologies greatly influenced  designers of the period. More sophisticated tube fluorescents and the introduction of new halogen bulbs sparked creativity in architectural lighting and specifically drove French lighting firm Verre Lumiere to explore innovative ways to utilize the newest bulb technology. César Putzeys was one of the first to employ halogen bulbs in a series of aluminum lamps in 1969–70. New lamps were also designed around the introduction of fluo-compact tubes (CFL) including Jean-Pierre Vitrac’s Strigam lamps (1983) and Sabine Charoy’s Lamp (1980).  Often designed for public commissions, these designs are an essential element in the image of French architecture from this period. 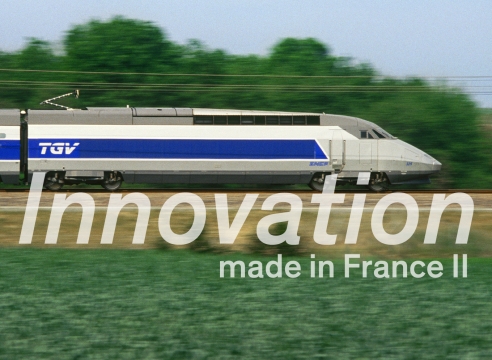