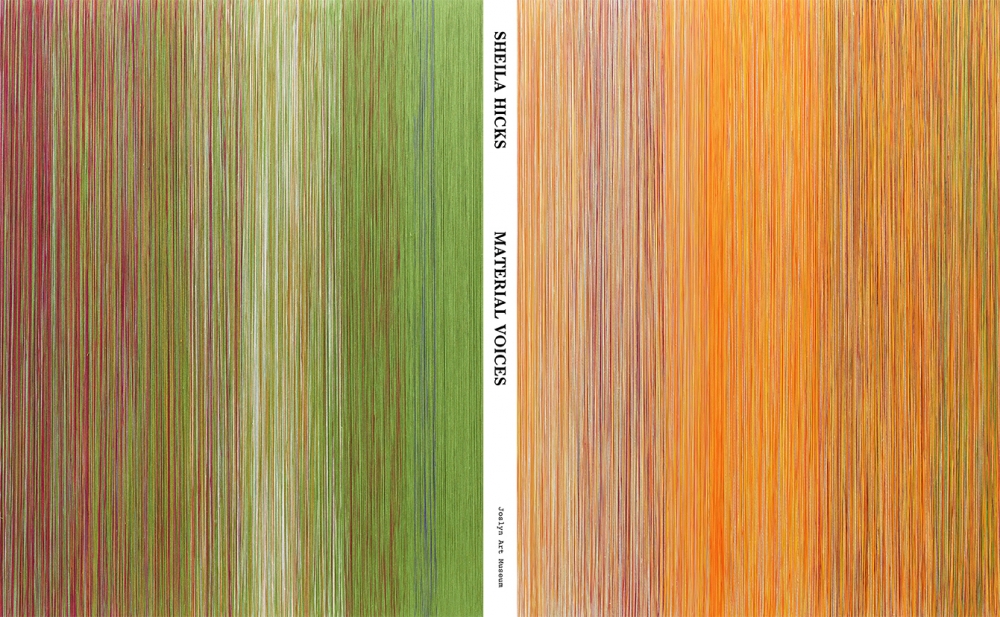 Sheila Hicks once mused, “I often make a statement about my feelings regarding the world using textiles as my language.” Sheila Hicks: Material Voices honors her unique vision, examining how her visual language has been shaped by memory, place, and space. Drawing on global weaving traditions, the history of painting and sculpture, graphic design, and architecture, among her many sources, Hicks has redefined the role of fiber and thread in art. From monumental architectural interventions to her miniature weavings known as minimes, Hicks’s compositions combine an aptitude for color, line, and texture with her inimitable understanding of architectural space.

Hicks was born in Hastings, Nebraska, in 1934 and trained as a painter at the Yale University School of Art, taking courses with famed color theorist Josef Albers, pre-Columbian art scholar George Kubler, and the architect Louis Kahn. Although she had learned to embroider and knit early in life, Hicks became interested in textiles in 1956 while studying Latin American art. The following year, she traveled to South America, a formative experience for the young artist. With Santiago, Chile, as her home base, Hicks toured the continent to photograph the landscape and historical sites and learn indigenous weaving techniques. These textile practices, along with other skills the artist discovered during her extensive travels — such as back-strap weaving and Moroccan and Guatemalan rug-making — continue to inform Hicks’s approach, even as she has developed new ways to use thread.

Upon completing her degree at Yale, Hicks lived for several years in Mexico before moving to Paris in 1964, where she still resides today. Her work has taken her across the globe, from Scandinavia, to Northern Africa, to the Indian Subcontinent, and now, on the occasion of her exhibition at Joslyn, back to the Midwestern United States. The most significant presentation of Hicks’s work in her home state, this exhibition spans nearly sixty years of her prolific career. Colorful suspended fiber pieces will engage and play with the architecture of the Museum’s Pavilion galleries. Among these installations will be a new, large-scale work created specifically for the soaring elevations of the galleries in the Norman Foster building. Spread throughout the exhibition will be minimes (min-eems) made over the last five decades. With their wandering lines and non-fiber materials — including feathers, shells, paper, and wood — these intimate weavings represent some of Hicks’s most experimental work. Using a crude loom she constructed in the late-1950s, Hicks turns to the minimes to reflect on her rich life experiences and world travels. Placing older work in conversation with recently-made objects, the exhibition reflects Hicks’s own understanding of her practice not as a trajectory, but rather as an open plane that has allowed for innovation, appropriation, and constant reinvention.

Sheila Hicks/Historic Works
Back To Top