Demisch Danant is pleased to announce Jazz, in collaboration with Ricco/Maresca. Inspired by the melodies and spirit of the 1950s in Paris, this exhibition highlights unexpected syncopation and rhythms shared by French design of the Fifties and paintings of architecture and cityscapes by African American artist William L. Hawkins. While the works on view derive from very different places of origin and eras of creation, and reside within the discrete categories of fine art and design, they are provocatively connected by the influence of postwar musical innovation and improvisation.

Freed from its former Napoleonic mindset and the traumas of World War II, Paris in the 1950s saw young French designers, including Pierre Guariche, Joseph-André Motte, Étienne Fermigier, among others, revivifying modernism and promoting a forward-looking lifestyle with furniture and architectural designs for a new postwar era. At the time, African American musicians were blazing a triumphant return to Paris, picking up where their 1920s predecessors had left off. For these musicians, the city was a haven from the social and economic constraints of America. Paris was full of basement clubs with avid audiences for visiting jazz bands whose inventiveness awakened a spirit of exploration among the next generation Parisian designers and artists.

In Columbus, Ohio, the African American artist William Hawkins (1895 – 1990) integrated a jazz sensibility into his creative process. Hawkins was functionally illiterate and completely self-taught; unaware of the rules of academic art practice, he was not constrained by them. Hawkins’ modus operandi was as improvisational, instinctual, and fluid as the jazz music he listened to. He utilized the elements found in discarded ephemera – newspapers magazines, and flyers that he collected every day on the streets of Columbus – as inspiration and material for his paintings, which recreate architectural icons as well as historic events and larger-than-life animals.

In both Hawkins’ paintings and the objects created by French designers of the 1950s, visitors to the exhibition at Demisch Danant will recognize the resourcefulness and freshness that are hallmarks of the jazz music loved by their makers.

Pieces by such designers as Joseph-André Motte and Pierre Guariche evolved from the young designers’ desire to produce affordable and efficient design in a changing world. Guariche became known for an approach to furniture, lighting, and architecture principally motivated by their emphasis on new forms, volumes, and materials. His designs reflect a commitment to simplicity – to locating the essence of a thing – and to the idea of series that can be industrially produced to meet modern demand. Guariche’s rare Wall Cabinet (1952), for example, is composed of functional, modular color elements.

An exacting but romantic minimalist, Étienne Fermigier was a furniture designer, interior designer, and gallerist of great influence in the postwar creative milieu of Paris. He was curious about every aspect of industrial aesthetics, as evidenced by the fact that, in addition to furniture and lighting, he designed hardware items, desk accessories, a television and several radios, a single-seater automobile before his untimely death at the age of 41. On view in the exhibition, Fermigier’s  Desk (1957) represents the ultimate in furniture fabrication: its construction, hardware, material, and proportions have the authority of breakthrough architecture.

Partners in life and work, Geneviève Dangles and Christian Defrance were among the most prolific designers of their generation, admired for their characteristically daring approach to re-interpreting the work horse objects of everyday life. Their Desk (1958), with its curved form and construction, is today considered one of the most innovative and avant-garde designs of its era.

Embracing new technologies and elevating common materials such as rattan and glass, Motte became one of the most influential designers in France with such iconic works as the 771 chair (1958). With a back and seat formed as a single element, this design achieved a surprising sleekness that has established the piece as an icon. Motte’s focus upon otherwise overlooked materials made cost-effective production possible. As he once said, “material is in charge, then imagination.”

William Hawkins took a similarly inventive approach to everyday materials, repurposing plywood and cardboard and discarded paint to make his work. He occasionally attached wood, gravel, newspaper photos, or found objects to his paintings, giving them an astonishing sense of life and atmosphere. Hawkins’ painting of architecture, here seen in State Capitol, Albany #2 (1986) and Old Town Square #3 (1987), is characterized by repeating geometries that resonate with the design objects on view and, again, call to mind the dynamic repetitions and variations of jazz music.

Jazz will be on view at Demisch Danant from 10AM to 6PM Monday through Friday, and 12PM to 5PM on Saturdays, from September 10 through October 19, 2019.

Joseph-André Motte (1925-2013), born in Saint Bonnet in the Hautes-Alpes, studied applied arts in Paris under René Gabriel, Louis Sognot, and Albert Guenot. By 1954, he founded the Atelier de recherche plastique (ARP) with colleagues Pierre Guariche and Michel Mortier as well as his own agency. A figurehead of the French modern design movement, Motte was frequently commissioned by the French government to participate in grand public projects, including the interiors of hundreds of metro stations in Paris where his chairs remain functional touchstones of daily Parisian life today. He also participated in the renovation of the Grand Gallery at the Musée du Louvre and designed presidential desks under the commission of the Mobilier National. Additionally, Motte conceived of the design for the airports at Orly, (1954), Roissy (1970), and Lyon (1975). In particular, his work with architect Henri Vicariot for the Orly Airport represented new levels of achievement in the marriage of structural and interior design.

Pierre Guariche (1926-1995) attended the École Nationale Supérieure des Arts Décoratifs de Paris (ENSAD), where he studied under René Gabriel. In 1948, Guariche began showing his work at the Salon des Arts Ménagers and designing for Galerie Mai. He went on to work in Marcel Gascoin’s studio, where he met Michel Mortier and Joseph-André Motte, and became a member of the UAM – the French Union of Modern Artists. Though best known for lighting he designed for Disderot in the 1950s, Guariche was a prolific and innovative designer and architect. At the height of his career, he worked mostly as an architect, designing many private residences as well as commercial and public spaces, including several ski stations. Guariche saw himself as an architect first, and his approach to both contemporary furniture and architecture was primarily motivated by a desire to emphasize form and volume. His work reflects a commitment to simplicity and, in the realm of furniture, to innovation in industrial production.

Étienne Fermigier (1932-1973), studied at the École Boulle and the École Nationale Supérieure des Arts Décoratifs (ENSAD) before opening his own studio in 1957, to devote as much attention to the creative challenges of interior design as to questions of industrial design. Two years later, Fermigier also launched the Meubles et Fonction gallery in partnership with Pierre Perrigault, running its interior design studio, which produced some of his designs and distributed others he had developed for some of the biggest furniture brands of the day. Fermigier’s avid curiosity about every aspect of industrial aesthetics took form in the extraordinary array of designs he conceived in his unconventional, daring practice – from domestic furniture and lighting to hardware items, interiors accessories, electronics, an automobile, and even a steamroller. A founding member of the CNAAC (Centre national d’ art appliqué contemporain), Fermigier was 35 when he received the 1967 Prix Gabriel, awarded in recognition of his body of design work for mass production. He died in a car accident at the age of 41 in 1973.

Geneviève Dangles was born in 1929, the same year as her eventual design partner and husband Christian Defrance. Dangles graduated from the École Nationale Supérieure des Arts Décoratifs de Paris (ENSAD), where she studied under René Gabriel. She subsequently worked as an apprentice to André Arbus before joining the studio of Marcel Gascoin. Defrance first trained in wood sculpture at the renowned École Boulle, meeting Dangles later at ENSAD. Together, they founded their own firm in 1953 and embarked upon a collaboration with Burov, creating metal and fiberglass furniture designs that would ultimately become prized examples of postwar French creation. The duo developed a highly innovative style characterized by original lines – combinations of the hard edged with the rounded and fluid – and unfailing comfort and ergonomics.  Among their best known works are the Saturn Armchair 44, the Chair 18, and the Sofa 58.

William Hawkins (1895-1990) was born in Kentucky and moved to Columbus, Ohio in 1916. His selective eye seized images from newspapers, magazines, and advertisements, which he habitually salvaged from dumpsters and kept in a suitcase for reference and use in his works. Hawkins combined these images with his own recollections and impressions to create a vivid picture gallery of animals, American icons (such as the Statue of Liberty and the Chrysler building), and historic events. Although the artist could barely read and write, he transformed words themselves—usually his signature and birth place and date—into powerful graphic elements within his works. 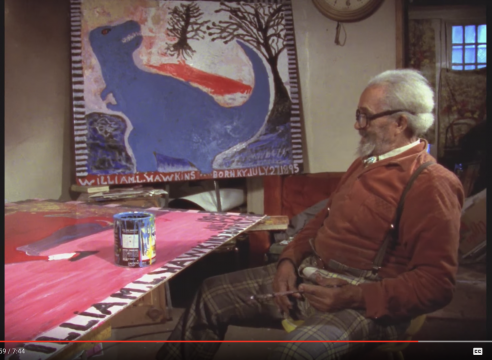 William Hawkins in conversation with Roger Ricco and Lee Garrett

This video was produced by The Foundation for Self-Taught American Artists.
Produced by Breakaway Films Inc. Edited by Zach Wolf.

This excerpt is from 1982 and was edited from raw material made during the filming of The Mind's Eye. It includes interviews with Roger Ricco, Lee Garrett, Robert Bishop, and William Hawkins.